A handy way to analyze Pac-Man’s maze design is to count the number of hallways, 3-way turns, and 4-way turns and then to consider their relation to each other. Turns are important to Pac-Man because every turn is the exact point in which the most meaningful decisions are made for Pac-Man and the Ghosts. In the same way players express agency with their turning and pathing choices, the Ghosts show their AI personality through the turns they take and the direction they move.

The whole gameplay experience of Pac-Man is a loop of deciding to turn or not. Figuring out the pros and cons of one turn versus another stresses knowledge about the game’s rules (complexities) and understanding of the current state of the maze, enemies, and items. Hallways (straightaways or paths with only 1-way turns) provide a nice contrast to 3-way and 4-way turns as the decision making while in a hallway is simpler (keep going forward or turn back). But keep in mind the potential to become trapped by Ghosts is higher in a hallway as there is only one entrance and one exit. 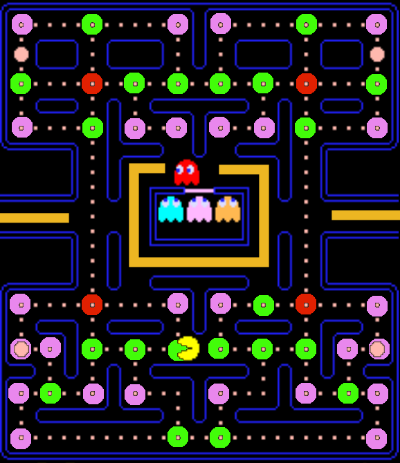 The Pac-Man Arcade maze has the following features:

The relationships between the numbers described above give the original Pac-Man level its maze feel and well-tuned gameplay. Notice how most turns are 1-way and 3 way. The abundance 1-way turns makes it so that the player’s fingers are rarely idle. Though moving through a 1-way turn doesn’t involve much decision-making, it does require timing. If players don’t give a MOVE input at a 1-way turn, Pac-Man will just sit there and waste time.

The abundance of 3-way turns means players will frequently make a relatively simple choice; turn into path A, B, or turn back around for path C. Because players are typically being chased by at least one Ghost and the goal is to move forward through all the dot lined paths of the maze, a 3-way turn is mostly about choosing path A or B. While it’s easy to pick the option to avoid running into a nearby Ghost, planning ahead even a few seconds into the future is increasingly complicated. Accurately predicting Ghost movement requires understanding the AI mode timer, current level of difficulty, each Ghost’s AI personality, and a few other special rules discussed in part two of this analysis. In practice, the player chooses quickly, moves swiftly, and watches the results of their turning decisions unfold before their eyes.

Here are a few other details about the original Pac-Man maze:

The biggest problems I have with the Google Doodle maze design is the concentration of turns and the placement of the Ghost House. Creating a maze out of the Google logo involves a lot of horizontal hallways. The Roman alphabet tends to create horizontally-oriented blocks of shapes. Hallways are great as a reprieve from continuous Pac-Man turning, but not as roughly half the maze paths. Basing the maze design around the Google logo also is why the Ghost House is made out of the lowercase “g” instead of the yellow “o”. The Ghost House functions best in the center of the maze so that the ghosts have the shortest distance to travel to Pac-Man once they exit. When navigating the left side of the maze in the Google Doodle Pac-Man game, consumed Ghosts are less threatening as they take more time to travel to the Ghost House and back to Pac-Man. When this happens, the gameplay experience becomes dull. 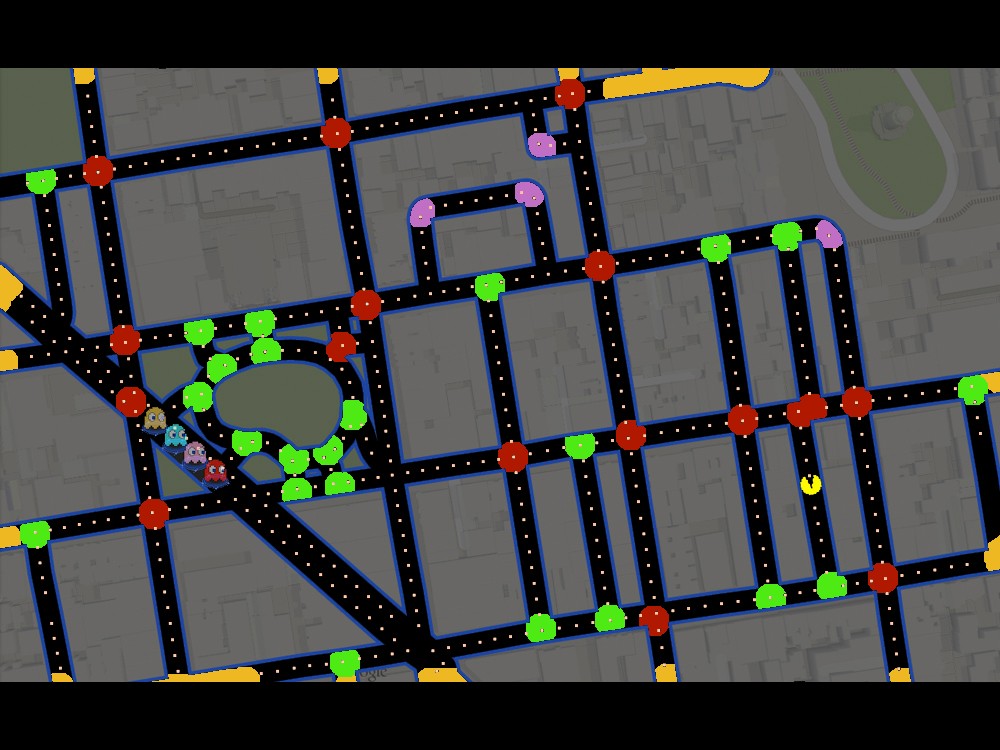 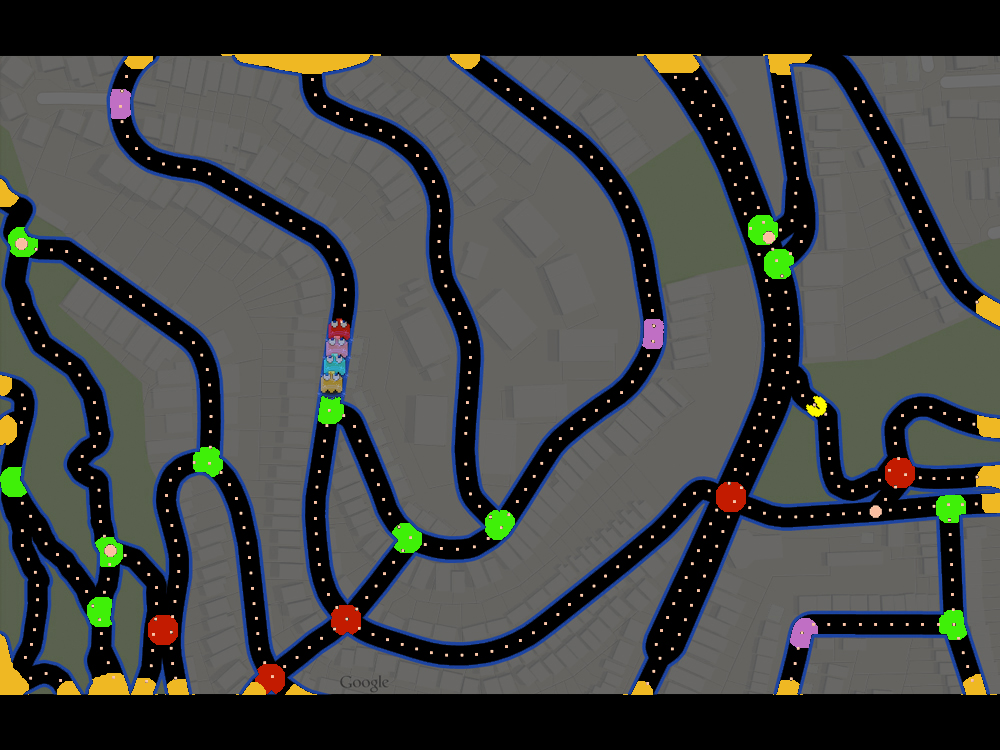 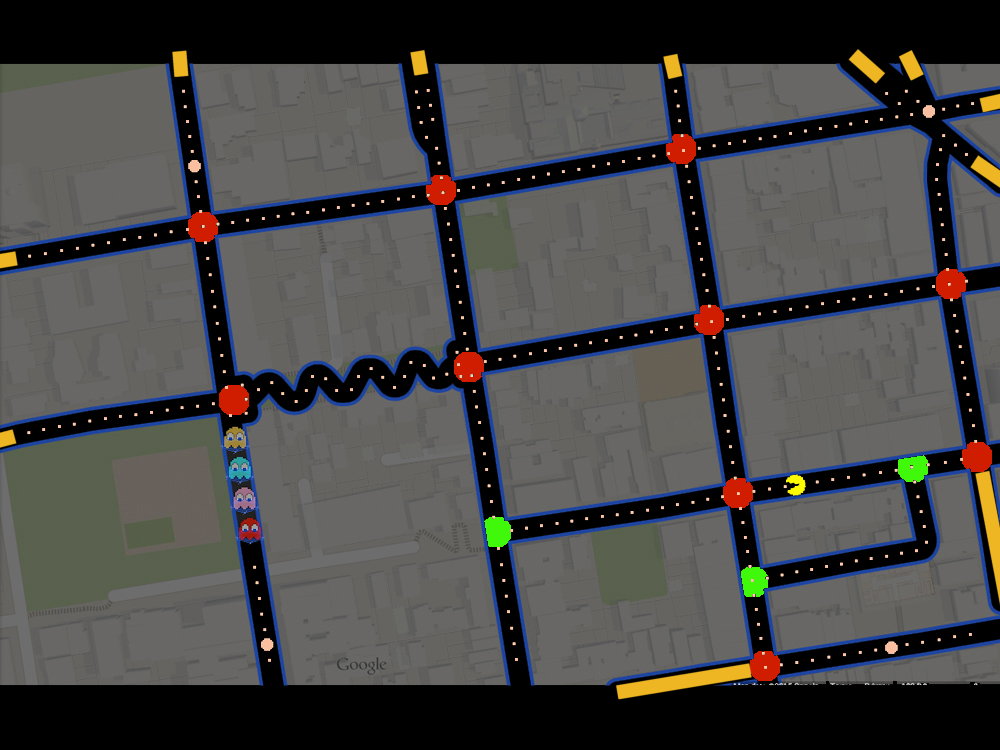 Real-life roadways, however, are not designed to challenge our brains. In fact, most streets are designed to be as simple and as straightforward as possible. This is great for modern living. It’s terrible for Pac-Man maze level design. Straight hallways in Pac-Man are death traps because they allow for very little decision-making while inside. Real-life roads are generally spaced apart from each other, further reducing the concentration of corners and turns, limiting how often Pac-Man can juke ghosts to buy more time.

It doesn’t help that the warps are unintuitive due to the lack of symmetry between entrances and exits. Sometimes entering the same warp can spit Pac-Man out of different exits. The Power-Pellets are placed randomly it seems. Sometimes they’re in a hallway; sometimes at a 3-way turn.Since the abundance of hallways means players will have less ability to out-maneuver Ghosts, grabbing the Power-Pellet becomes either necessary for survival or a boring choice–there is no expedient way to maneuver around the Power-Pellet to save it for later. Ultimately, the Power-Pellet placement algorithm results in fewer Ghost chases and fewer exciting situations where Pac-Man barely turns the table on ghosts who are rapidly cornering him.

For these reasons, most of the Google Map Pac-Man levels I’ve played have given me little fun and much frustration compared to the original Pac-Man maze. Procedurally-generated level design is harder to execute well for games that have deep and complex gameplay. With mazes designed from road maps, the algorithms Google used to generate the Ghost House, Power-Pellets, and warps don’t produce levels that support interesting gameplay.