This video showcases a unique strategy that revolves around the Pokemon Exeggutor and a rare ability called Harvest. This ability is only found on 5 grass type Pokemon and it lets them consume and regrow Berry items. In the video the Berry chosen is the Petaya Berry which boosts a Pokemon’s special attack when consumed. After seeing the strategy in action, I laughed. I gasped. I pondered why I haven’t thought of it before, and then I laughed again. But if you’re not familiar with Pokemon, you probably don’t really understand what’s going on. There might be this gap preventing you from relating to my excitement or the creativity here.

To illuminate the mystery of creativity and conveyance, I’ll explain why this Harvest + Exeggutor strategy is creative and why it’s so difficult to convey to those unfamiliar with Pokemon and its metagame. To do so I’ll touch on the game design topics of complexity, design space, and nuance.

Whether you’re familiar with Pokemon or not, you should know that the Pokemon handheld RPG video games are very complicated. When I say complicated, I mean there are a lot of rules. Even if we just focus on competitive battling (ignoring all single player challenges, secrets, etc.) we’re talking about hundreds of Pokemon, hundreds of attack moves, half a hundred held items, a handful of variable stats, and a few abilities per Pokemon. There’s a lot of individual rules to learn that come together to make billions of combinations.

To help organize all this data, it’s helpful to think in terms of the design space, which is a way of organizing all the stuff in a game. In this case, we’re specifically looking at the design space of competitive Pokemon battling. By looking at the big picture and how all the battle rules combine, we see new patterns and groups. For example, fighting type Pokemon generally have high physical attack. Makes sense, right? Also, special (non-physical) fighting type attacks are rare and tend to be inaccurate or weak. That’s good to know. Knowing this pattern, if you see a new fighting type Pokemon you can make a few safe assumptions. Recognizing what is rare, uncommon, and common across the entire game helps players make more informed decisions against the staggering (billions) unknown possible combinations.

Even after seeing the big picture of the design space, there are still dozens of complexities to learn per category. Competitive battlers first learn the moves that seem most powerful or that are most frequently used in competition. As part of a communal learning environment, it’s hard to go against the trends of what’s popular/powerful as the strategies the community prioritizes will be the ones that are refined over time. After all, it’s these strategies that have the most thinkers and testers working on them. And whatever rises to the top of this priority list generally does so because it’s effective in an obvious way that most people can understand and use. 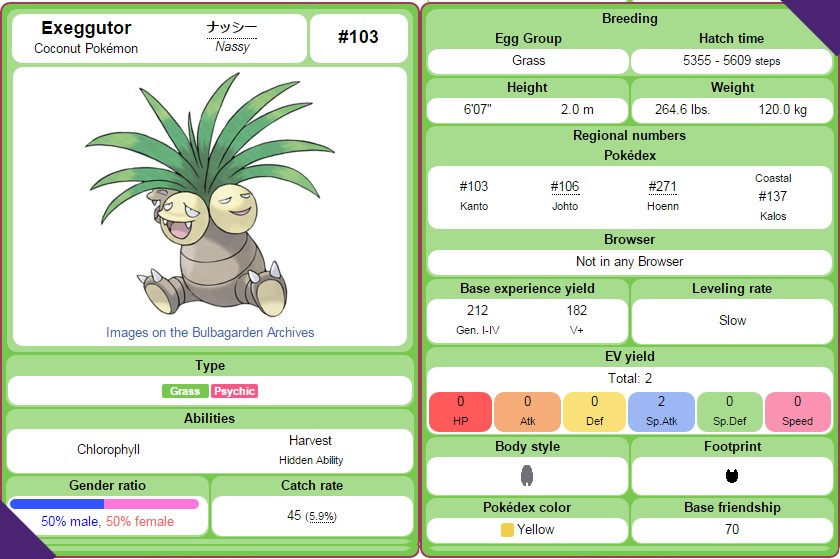 There are many reasons why I haven’t seen the Petaya Berry Exeggutor Harvest strategy before: 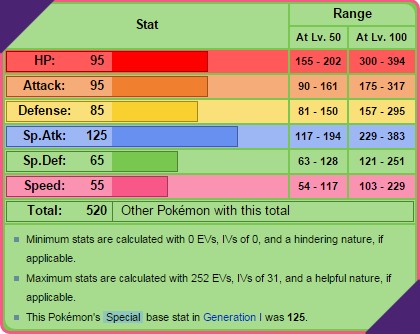 Each of the reasons detailed above is the result of thousands of players who chased power and thus defined the overused, popular options. As the community seeks and refines the powerful and popular strategies, all other strategic possibilities are implicitly categorized as less powerful, less obvious, and less effective. In other words, it’s the complexities that get ignored or overlooked that become nuanced.

Keep in mind this sorting is based on what seems powerful. All the overlooked, nuanced Pokemon, moves, and combinations may still be effective, but they’re simply off most players’ radar. The nuanced possibilities therefore surprise us so much more when they turn out to be effective. And for games like Pokemon, surprise and unpredictability are powerful. It takes someone with a vision, or inspiration, or enough luck when throwing random things together to show everyone just how powerful the overlooked and the unexpected can really be; and how much room for novelty and diversity there is within the design space of Pokemon battling.

When I see the Exeggutor strategy begin to fall into place, my entire understanding and history of Pokemon is brought into a sharp focus, reminding me that though I’ve competed at events, explored the worlds of each game, and even dreamed up my own Pokemon games, that there is still a grand possibility space to explore between all of the known areas I’ve charted. Seeing Exeggutor dominate takes me back to 1999 when I retooled my team in Pokemon Red by replacing the Venusaur I had since the start of the game  with an Exeggutor because I noticed Exeggutor’s superior special attack strength. I changed my whole team and strategy because I noticed one detail in a sea of options. Despite all the trends, I decided to go in a different direction, while I huddled over a Prima strategy guide searching for my own unique way to be the very best.